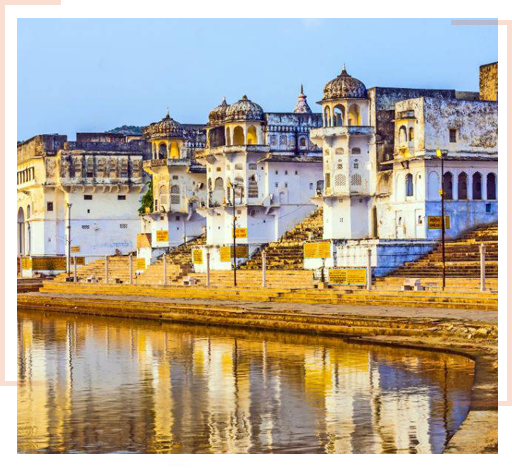 Pushkar is a town in the Ajmer district in the Indian state of Rajasthan. It is situated 14 km (8.7 mi) northwest of Ajmer at an average elevation of 510 m (1,670 ft) and is one of the five sacred dhams (pilgrimage site) for devout Hindus. According to Hindu theology, the pond at the Katas Raj Temples near Choa Saidan Shah in Chakwal District of Pakistan has a theological association with Shiva; it was formed by the tears of Lord Shiva which he is believed to have shed after the death of his wife, Sati. The story goes that when Sati died, Shiva cried so much and for so long, that his tears created two holy ponds – one at Pushkara in Ajmer in India and the other at Ketaksha, which literally means raining eyes, in Sanskrit. It is from this name that the word Katas is derived. It is often called "Tirth Raj" – the king of pilgrimage sites – and has in recent years become a popular destination for foreign tourists.
Pushkar is one of the oldest existing cities of India. It lies on the shore of Pushkar Lake. The date of its actual origin is not known, but legend associates Brahma with its creation.